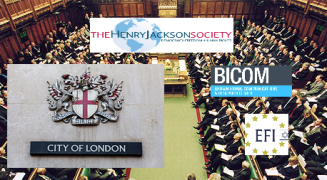 There is something fundamentally wrong with Britain.  I have addressed in past blogs how the neoconservative political thinking, which a number of government officials adhere to, is dangerously spearheading Britain towards a neoconservative authoritarian state, no doubt due to the lies, deception and tendency toward despotism inherent in its philosophic underpinning.

Though it is established that neoconservatism has taken root in the government, what needs further analysis is how it is drastically undermining democracy through influence, backed by spineless corporations and one-track “think-tanks”.   In the end, it is this triumvirate of influence which negatively impact the “demos” in the “democracy”.

Unleashing Corporations Against the People

George Osborne announced, in time for the run up to the election, that he will ensure companies which avoid tax through elaborate tax havens, are forced to pay taxes. Note of course, that the biggest tax havens in the world reside in the square mile of City of London as well as the Cayman Islands, the former for which the government legislated to make tax avoidance far easier for large transnationals. David Cameron even exclusively consulted those holding hundreds of tax haven subsidiaries on how laws should look within that process.  But let not such a minor point distract us.  Osborne’s proposals, like a catalogue of prior fiscal failures, seem unrealistic, as the taxes (which is already low for companies), are most to likely to bounce due them conflicting with EU law.

The proposals themselves would have limited impact on big companies like Google and Amazon which Osborne seeks to target.  Once we get passed the potential illegality, and the slippery nature of its application, the aspect being taxed, “diverted profits”, would be equivalent to trimming at the hedges.  Professor Sol Piccciotto, notes,

Against this backdrop, we have the neocon government pushing the Trans-Atlantic Trade and Investment Partnership (TTIP) between the US and the UK.  David Cameron launched an attack last year against the candidacy for European commission presidency of Jean Claude-Juncker, claiming he threatened British sovereignty. In reality, the frustration was born from the fact that Juncker had sided with the popular objections against the TTIP, which allows corporations to sue governments if they implement laws and policies which impede their projected profits.

The “trickle-down” economic model, which benefits the corps and upper income earners on the basis that money will eventually benefit the society as a whole, has been driving the recovery from recession.  From bailing out banks, to pumping more money into, well, banks, the plans put in place have failed.  A leading economic think-tank, Organisation for Economic Cooperation and Development (OECD), recently concluded that the model has in fact slowed growth in the UK, in addition to increasing the wealth gap between the richest and the poorest.

Moreover, it is the people who suffer in Osborne’s suggestions to “balance the books”; he is not asking corporations to cough up more in taxes as recommended by OECD’s findings, but rather, he is making life more difficult for the younger, lower socio-economic class – the same section who have been hit the most by the squeezing wage slump. The fact that over four million people, including 500,000 children, are starving in Britain thanks to the government cuts and “corporate greed”, is perhaps one of the greatest marks of shame for the government today.

The dystopian imagery gets worse when one begins to grasp the extent to which squalid corps influence policies which affect us.  This shouldn’t be a surprise given the fact that the City’s lobby machine has in the past used a budget of £92 million, which has realised fundamental policy changes, from slashing UK Corporation tax to killing off government plans for a corporate “super-watchdog”.

And it’s not as if the corporations are imposing themselves on the government.  We have already seen how the TTIP is ripping apart the sacred “British value” of democracy the neocon government so militarily imposes on Muslims.

In early 2014, hedge-fund chiefs had donated £1.32 million to the Conservative party within the span of three months.  Later, the party held a fundraising dinner attended by senior cabinet members who sat alongside billionaires from disparate corporate industries, including former executives of the blood-leeching Goldman Sachs. With such proximities, it is little wonder then, that whilst the people during 2011 were enjoying the wonders of austerity measures, HMRC was writing off £10 million in taxes owed by the investment banking firm.

Anti-Fracking campaigners have been opposing the Infrastructure Bill which allows for companies to frack for shale gas more easily, violating basic human rights in the process (there’s that good ol’ British value again!). While Scotland is announcing a moratorium on the issue, Cameron rebuffed such suggestions by renewing his commitment to support shale gas. This rigidity makes sense when you consider that potential party donors who are being wined and dined with the Cons include chief execs of lobby groups like Bell Pottinger, which represents the fracking company Cuadrilla.

Then you have the incestuous relationship between Zionist lobbies and British neoconservative outfits and individuals, directly influencing policy in Britain.

Described as possessing a “neoconservative hue”, one such organisation is the AIPAC-aping Zionist lobby group European Friends of Israel (EFI), situated in Brussels and founded by Stuart Polak, the director of Conservative Friends for Israel (CFI) since 1989. EFI is financed by corporations and individuals from Europe and Israel. According to an extensive analysis by David Cronin, its remit is to shape elite opinion rather than the wider public, by whitewashing Zionist crimes against Palestinians.  This is corroborated by a 2015 report by the Corporate European Observatory, titled Spin Doctors to the Autocrats: How European PR Firms Whitewash Repressive Regimes, which declares that the EFI,

“…has been keen to reframe the image of the country as not just being defined by conflict, sometimes to the point of surrealism.” (p.43)

It hosts extreme Jews including far-right racists and advocates of settlement expansion. The EFI has is known to have defence links with Israel Aerospace Industries (IAI), which was one of the largest suppliers of arms to the IDF during the 2009 Gaza massacre. IAI was among the key sponsors for the EFI launch and has strong links to the arms industry thanks to Stuart Polak’s consultancy firm.

Lobbying from Britain through the EFI has been strong.  The EFI has been instrumental in restarting previously stalled trade agreements between EU and Israel, thanks to EFI supporters from the UK, namely Charles Tannock, and Liberal MEP Sarah Ludford. Note, that the trade agreements were stalled indefinitely due to the killing of Turkish activists aboard the Freedom Flotilla by IDF soldiers.

In January 2014, it hosted a conference on the “Middle East peace process”.  Amongst the various neocons and pro-Zionists was one Oren Kessler, a researcher at everyone’s not-so-favourite-unless-you’re-an-Etonian, Henry Jackson Society (HJS).

The synergy between the two groups, (both are neoconservative/pro-Zionist) is not exactly hidden.  Yet HJS has until recently, funded all-party parliamentary groups (APPG) on international and homeland security, thus directly influencing domestic and foreign security policies.  Like most neoconservative, pro-Zionist outfits, it too keeps its donor information hidden, and it is for this reason HJS was forced to quit its role in Westminster. Despite this, it has emerged that HJS has been funded by Nina Rosenwald, a philanthropist who has used her millions to cement the alliance between the pro-Israel lobby and the anti-Muslim hatemongers, whilst other sources suggest donors of HJS include the Zionist entity’s far-right Likud party.

The involvement of neoconservative/Zionist lobbies is intertwined and parasitic. The leading Zionist lobby group, the British Israel Communication and Research Centre (BICOM), was implicated through its principal donor, “Poju” Zabludowicz, in the scandal involving Liam Fox’s neoconservative outfit, Atlantic Bridge in 2011. Zabludowicz funded the think-tank, which was linked to far-right, anti-Muslim movements, and had on its board Michael Gove, Chris Grayling and George Osborne as well people connected to US neocons.  It was being used by Fox and his non-government-official friend, Adam Werritty to set up various business and political activities.  Jim Murphy, the then Shadow Defence Secretary, said, “this crisis has discovered traces of a stealth neocon agenda.”

The think-tank and neocons thoroughly undermined democracy and was later deregistered.

Zabludowicz had in the past worked with leading neocons like Richard Perle to prop his father’s arms business.   Perle, it is to be noted, was the key architect of the Iraq War, is one of the “experts” found on the Rosenwald-funded Hudson Institute, and is currently listed as the patron of the HJS.

BICOM itself launched a pro-Zionist quarterly journal called “Fathom”. Among the advisory editors are Efraim Halevy, the former director of Israel’s foreign intelligence agency Mossad, and neoconservatives from both sides of the Atlantic.  One of those neocons is Alan Mendoza, the founder and executive director of HJS.

What triggered me writing this article was the reduction of petrol prices at the pumps. While filling up my humble means of transport with the black gold that has spurred the neocons into a militarist frenzy, it occurred, to me that though us, the common folk, relish in the fact that the price of unleaded has finally fallen below the thicker coin, there is a bigger game, which forms the central theme of this piece: the impact of corporations and “think-tanks” on our daily lives.

The influence of corporations on the senior politicians is such that claims that we live in, and should respect the “British value” of democracy, become a sham. We live in a corporatocracy, where the interests of big businesses outweigh the need to house, cloth and feed the people, and in return, the neocons in government preserve their coveted power.

The sheer magnitude of the extent and ideologically-driven nature of the influence being wielded by such lobby groups in the corridors of power his most perturbing. Those directly linked to militarist, elitist, think-tanks like HJS, such as neoconservatives William Shawcross and Michael Gove, hold active positions in government and public bodies which have systematically demonised and targeted the Muslim minority. They have been directly whispering into Westminster through the ear canals of the APPGs. The question we need to ask is, who or what takes priority – the millions starving in Britain and the younger generation which is being stifled or the need to PR whitewash Israel and keep the heartless bosoms of the corps coveted? What contingency do the people have with the noose of elections hanging around the necks of scapegoated minorities? The financial elites have their contingencies in place, with plans already made to migrate to New Zealand in case the people decide to wake up.

Benito Mussolini in his essay on fascism, an ideology so very admired by the neoconservative “godfather” Leo Strauss, wrote that fascism is the marriage between corporation and state.  With our elected officials dining with big corporations, secrecy surrounding donors of political parties which we vote for, lobbies and think-tanks driving policy, there is not a marriage, but rather a polyamorous party taking place with the state, corporations and neocons. Britain needs to be wrested from neoconservatism and its advocates, fast.