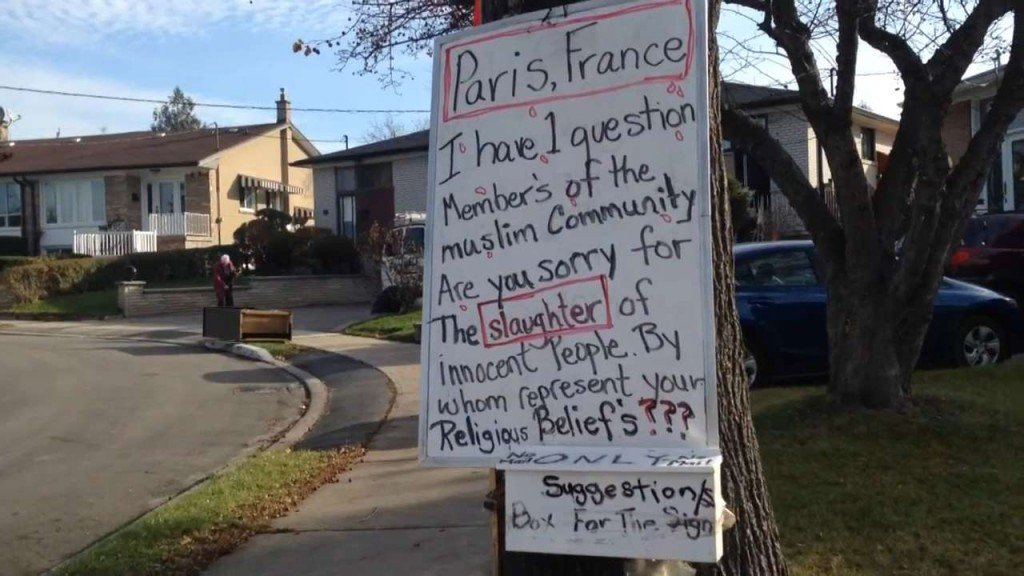 Whilst the impassioned feelings after the attacks in Paris against civilian targets are one of sadness followed by rage, it would be safe to say that for the Muslim minorities in the West, the overall reaction is one of shock followed by continued anxiety.

This anxiety has varying sources and manifests itself in different ways.  From Muslims feeling compelled to apologise for crimes they neither condone or have any part in, to being publically compelled to condemn such attacks.  The anxiety is exasperated when Muslims witness the hypocrisy in such calls and take a principled stand in order to avoid political exploitation. Muslims are witnesses to similar atrocities against people of other faiths, geography and race, yet privileged elite in Parliament are not seen to issue a condemnation against such regular terrorism – as a matter of principle, why should public and vocal condemnation be forcibly extracted on certain violence as the state eye is rendered blind when the violence is born from Western policy? I am yet to see mass condemnatory statements for Palestinian babies being burned to death by Jewish settler terrorism, or Palestinian civilians shot to death “intentionally and unlawfully” by IDF terrorists (who also happen to run over two year old toddlers), from the Cameron government or the various state-authorised counter extremism organisations for that matter. And indeed, I do not see the Jewish community being asked to condemn or apologise. This suggests such calls are ideologically and politically driven rather than rooted in humanity.  Only white/Westernised power-structures are worthy of solidarity.

This privilege-laden colour-blind discrimination, has at its basis the neoconservative culturalist assumption that religious ideology (Islam) is the cause of “extremism”. It is this bigoted worldview which encourages a second source of Muslim anxiety: the inevitable backlash that has become the norm in such tragedies.  Since the attacks, anti-Muslim bigotry has fulminated like a latent disease manifesting itself. Just a brief snapshot of reports reveals this reality.

In Britain, a Muslim woman who was with her distraught 5 year old son was subjected to abuse and called a “murdering Muslim”; a fast food outlet-owning couple were injured and hospitalised as a mob of 15 people attacked them hurling racist abuse and citing Paris; in Cardiff, a Muslim cultural centre was firebombed; one woman has been arrested for posting a message on social media saying that her beauty salon would not be taking bookings “from anyone from the Islamic faith whether you are UK granted with passport or not”. On social media, people are also reporting violence against the vulnerable. A thirteen year old Muslim child attempted to board a Transport For London bus (route 25), when the Caucasian bus driver shouted: “You’re a bloody Muslim get out the bus”, leaving the child in fear. Two Muslim girls in separate instances were physically attacked, with one having hot coffee splashed in her face by two white males in Barking. University Islamic societies have received anti-Muslim abuse and death threats across the country, whilst a Muslim journalist, thanks to irresponsible lies and smearing by propagandist media outlets, the Daily Mail and Breitbart, also received death threats. There has also been a spike in attacks in Scotland.

Across the pond, a similar pattern has also emerged. In Canada, a Muslim mother was attacked and her Hijab ripped off as she was picking up her children from school whilst another woman was assaulted and robbed. One man in Quebec wearing a Joker mask threatened to kill “one Arab a week”. In the US, Islamic centres have been vandalised, a mosque had a torn Qur’an covered in faeces thrown at its doorstep, and threats of shootings and firebombing are being made to Islamic societies.

The grim picture continues to be drawn in the already stricken France, where reports of a “flood of violent language on Facebook to kill Muslims” can be found. Muslim women paying homage to the attacks have been abused. The far-right have typically gathered to “out the Muslims” and spew the usual servings of anti-Muslim bigotry. Yesterday, a veiled Muslim woman was punched and then slashed with a box-cutter as the assailant made comments about her clothes.

State officials have done little to reduce the negative Muslim stereotype and have instead fostered the anti-Muslim sentiment. You of course have the Nazi-esque loons like Donald Trump in the US. Cementing the securitisation of the Muslim minority as “our way of life” crumbles, Slovakian PM Roberto Fico stated after the attacks that “we are monitoring every Muslim”. In France, Robert Chardon, the UMP mayor of Venelles in southern France, tweeted:

The discriminatory Prime Minister of Britain, David Cameron, also pulled no punches in dragging Islam to the fore and into the terrorist equation. To the glee of fascist neoconservative hate preacher Douglas Murray, Cameron said after the attacks that,

“It is not good enough to say simply that Islam is a religion of peace and then to deny any connection between Islam and the extremists. Because these extremists are self-identifying as Muslims.”

This statement is most likely sourced from Maajid Nawaz (such a claim keeps him and his organisation in business because it “empowers reforming voices”), and endorsed by his friend Douglas Murray. The semantic obfuscation peddled is that such attacks “have *something* to do with Islam”. Of course they are keen to note that it’s not everything, but it is the only factor distortedly highlighted by them. Brushed aside is the fact that terrorism has *something* to do with a multitude of other stronger factors such as economic deprivation, supremacist abuse of liberalism spun as “muscular liberalism” resulting in minority disenfranchisement, belligerent retroviral neoconservative domestic and foreign policy, lies, and centuries of violent colonialist meddling in the Middle East.  Anti-Muslim elements in society are dogwhistled by such statements as they interpret this as a green-light for them to grant practical implementation to their prejudice against the Muslim minority. Typically, the get out clause employed by such anti-Islam individuals is that they are against anti-Muslim crime too.  However, it would be ridiculous to encourage a bigoted sociopath by linking his/her victim to an inflammatory narrative, and then claim you are against the eventual attack. It is negligence, or simply plain propaganda constituting a form of coded incitement. Moreover, the argument itself is silly; it is like claiming all those who claim to be British are “connected” to the Iraq war because Tony Blair self-identifies as British and therefore the Muslim genocide resulting from it has *something* to do with being British. I am pretty sure ISIS would appreciate using such logic as a recruitment narrative.

For a moment however, let’s apply this crude culturalist analysis and focus on ideology.  The emerging profiles of the perpetrators of the Paris attacks paints a picture which can hardly be described as the paragon of Islamic piety. One female bomber is alleged to be an “extrovert” who drank alcohol and was nicknamed cowgirl due to her love of wearing big cowboy hats. Her brother states that “she was not interested in studying her religion. I never saw her open the Koran.” She started to wear the veil barely a month before the attack. In one image, she is shown gesturing two fingers in a hip-hop fashion.  Another attacker has been described as running bars which was also a hub for drugs.  He himself was drug dealer who drank, “smoked and killed people”. He went to clubs and “never went to the mosque”.  A further report highlighting the same notes that “his actions appear to have been motivated more by a thirst for power, violence and unaccountability.” Even neocons know that these vices are completely antithetical to Islam.  In fact, given their drinking, they have *something* to do with Western way of life; the Charlie Hebdo cartoonist Joann Sfar published a series of cartoons on Instagram, all highlighting “drunkenness”, “drinking”, and “Champaign” as the Parisian way of life.  The background of the attackers would agree with this lifestyle. Meanwhile, the latter three corrupt traits (power, violence and unaccountability) perfectly describe neoconservatism.

Let us turn to the West-wide white terrorism outlined towards the beginning of this piece.  Terrorism is (loosely) defined as unsanctioned violence in pursuit of political purposes. Most if not all of the attacks are directly the result of the political violence perpetrated in Paris.  So what drove the perpetrators to violence? If we reduce ourselves to the incredulous analysis of the neocons and their accompanying financial leeches, and limit it to the culturalist domain of ideology, we can equally argue it was Murray’s much vaunted “Judeo-Christian” culture of violence, which incidentally contributed to an eventual genocide of the “Judeo” part of this interesting cultural construct and later the Muslim part which has been caste out by Murray (note also that Christianity has coursed through much of the early Iraq war rhetoric and actions). Is it secular liberalism, which, based upon certain “interpretations”, is antagonistic to religion in the public sphere?  Or perhaps it is the selfish reality of individualism, resulting in unfettered desires leading to the type of nihilism demonstrated above?

Or perhaps it is the cumulative result of over a decade and a half of dehumanisation of the Muslim minority as the “other”; a minority which is to be viewed through the prism of security and suspicion, and which is relegated to second-class citizenry through counter-terror measures and the discriminatory PREVENT Strategy; a minority which is a victim of white privilege which courses through the veins of the state and media apparatuses and which plays down white terrorism as an anomaly whilst systematising Muslim violence as a norm rooted in the Islamic faith. People, it seems, have become desensitised and indifferent to the unequal treatment of the Muslim minority and therefore, feel this dehumanised minority can be open to attack.

Or perhaps people are just emotionally charged, and in a fit of rage have taken it out on those which our government in a propagandised fashion conjoins a tragedy to the faith of 4% of Britain’s population through a spurious “connection”. In other words, perhaps it is not in the main ideological, but rather it is a combination of distorted narratives, frustrations born of economic insecurity and political occurrences fuelled by political and media hyperbole.  Of course, we can stomach a multifaceted explanation in this context.  Stomaching it in the Muslim context is difficult because it fails to satisfy the invisible prejudice which has sadly permeated parts of society and the political establishment.

The baseless, counterproductive, ideologically-driven focus on religious ideology by the likes of Nawaz, Murray and Cameron has added to the climate of fear and ignorance and is fueling the cycle of violence. Nobody except those who are a part of the industries born after the War on Terror and cashing in on perpetual war, benefit.