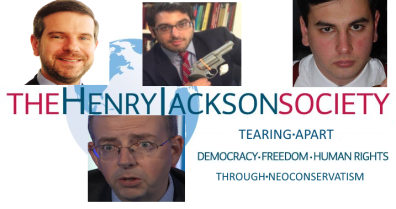 In my previous set of blogs (here and here), we saw how those groups connected to “foreign influences” – the sophisticated pro-Israel lobby and neoconservative “think-tanks” – have bullied through unethical policies and laws which have deteriorated civil liberties.  Characteristic amongst these lobby groups which have unquestioned loyalties to a foreign belligerent state is the use of threat and intimidation; not toeing the pro-Israel line means no “donations”, as accurately demonstrated by Ed Miliband’s condemnation of the 2014 Gaza massacre. And no donations means a lesser likelihood of attaining power. It is similar to how these behavioural traits manifest in other areas of politics. In place of diplomacy, neocon like to utilise “Hard Wilsonianism” urging the benevolent bombing of “peace” and “freedom” into the hearts of (mainly) Muslim communities throughout the Middle East in concert with Zionist strategic interests. At home, bullying has been used effectively against those who politically dissent against government policies by being hounded by a press using strategies devised by neocons. There is also, of course, using the law to force compliance to state ideology and policies through PREVENT. In the words of Machiavelli, approvingly quoted by the “godfather of neoconservatism” Irving Kristol:

“for neither conscious nor shame ought to have any influence upon you… those who obtain great power do so either by force or fraud, and having got them they conceal under some honest name the foulness of their deeds”.[1]

There is a darker side to this bullying and intimidation. Wrongdoing over the years, like donation scandals and buying or selling influence, which would result in a cacophony of press coverage accompanied by vigorous laws and regulation if the perpetrators were Muslim, barely attracts a slap on the wrist where individuals involved have been linked to pro-Israel lobby groups.

Of late, another corruption scandal has been rocking Westminster. This scandal traces back through the Zionist cartel and implicates the Henry Jackson Society (HJS).

In September 2015 it was reported that a young Tory activist, Elliot Johnson had committed suicide as a result of a sinister set of events which included intimidation by “Tory-Tatler” Mark Clarke, a former Tory parliamentary candidate, Freemason and director of the militant Young Britons’ Foundation (YBF). Clarke was made the subject of allegations involving bullying, blackmail and sexual assault. The culture of intimidation and bullying was raised by Sayeeda Warsi to then party chairman Grant Shapps and the party chair Andrew Feldman, both of whom failed to deal with allegations properly. Last month it emerged that Feldman – contrary to his claims – had been warned of Clarke’s ‘rude, lazy and aggressive’ attitude when he was put in charge of the Party’s ‘Road Trip’ Election campaign in 2014. Feldman’s co-chairman Shapps, read out to Feldman a damning confidential report on Clarke. In spite of this, Feldman supported the decision to make Clarke ‘Road Trip’ director. Shapps resigned in the wake of the scandal.

Shapps who has become “a lot more Zionist” of late, has attended Conservative Friends of Israel (CFI) conferences alongside Michael Gove, Theresa May and David Cameron.  He has previously operated in a dubious manner running an undeclared second business under a pseudonym. He flatly denied it outright before admitting to the secret set up. Andrew Feldman, a chief fund raiser and donor to David Cameron, is described as “wedded to David Cameron”, while Cameron himself has stated that he is “one of my oldest and best friends”. According to Peter Oborne, he is an influential supporter of the CFI, and is a trustee of Community Security Trust. He is also said to be on good terms with Jewish Leadership Council figures such as Mick Davis, Gerald Ronson and Trevor Chinn.

Late last month, yet another top Tory resigned from his post as leader of the influential Thatcherite group Conservative Way Forward. The lawyer, Donal Blaney, is described as an “ally” of Clarke and both were involved in YBF (Blaney is chief executive of YBF). Blaney had allegedly charged extortionate amounts from Johnson for legal advice, including the issue over Clarke’s behaviour. The lawyer has now left the country.

It is at this point that a connection between this case and the worst of neocons is made.

Alan Mendoza is the executive director of the hate-funded, pro-Israeli, neoconservative Henry Jackson Society (HJS). A further link between the pro-Israel lobby and Mendoza is made through his wife, Claudia, who is the head of policy and research at the Jewish Leadership Council.

Raheem Kassam is the infamous director of the neocon HJS sub-organisation Student Rights, a former campaigns director for the HJS, and the Editor in Chief of Breitbart London.

In an incredibly revealing post in the Commentator describing the “vast culture of wrong-doing where crime in the Westminster is being tolerated”, a link is made between Blaney, Kassam and Mendoza. The article alleges the following against the latter two:

1) The owner of The Commentator, Robin Shepherd, was threatened, against financial ruin (and police arrest) for revealing evidence about fraud, blackmail and related offences committed by an ex-UKIP aide [Kassam], and a former Tory Parliamentary candidate [Mendoza].

2) This influenced the 2015 General Election, and is widely known about in the Westminster Village.

3) As of last week, Shepherd remained under blackmail against testimony regarding (but not limited to) the officially registered allegations against Raheem Kassam (General Election, 2015 UKIP chief of staff to Nigel Farage; fraud, blackmail etc), and Alan Mendoza (Brent Central 2015 Tory candidate; “assistance” and perversion of the course of justice).

Last year Kassam was accused of multiple counts of fraud, theft, blackmail and extortion. With this latest piece, the allegations stretch to Mendoza.  In an update to the article at the bottom of the article, there is an allusion to Blaney having “connections” with Kassam and Mendoza. This is elaborated in a follow-up Tweet, which asserts that Blaney acted as a criminal lawyer on behalf of “UKIP criminal Raheem Kassam”. Interestingly, according to the paper Blaney is also an ally of Louise Mensch, who a couple of months ago went into a spasm over sex separation at a Labour rally, and which incidentally, was highlighted in David Cameron’s recent racist tirade against the Muslim minority. Blaney’s law firm is currently under investigation by the Solicitors Regulation Authority over the suicide of Johnson. The scandal seems set to grow:

Bullying, threats, blackmail, extortion and fraud. It sounds like neoconservative/Zionist practices usually reserved for theatres of war (and against the Muslims of Britain), are allegedly being employed in Westminster against anyone who steps out of line. Yet there seems to be a media blackout covering these shocking revelations.

Moreover, despite this scandal, there is ample indication that Mendoza’s HJS is influencing if not operating within Home Office departments (like the Extremism Analysis Unit).  Mendoza himself has stated,

“The idea is to influence policy and make a positive change in this country and beyond. What we try to do is bring a perspective that often isn’t heard in the media, in the think tank community and politically and bring it to the fore.”

When such allegedly corrupt individuals like Mendoza who whitewash Zionist crimes and “pervert the course of justice” in cases involving fraud suspects using intimidation, are virtually intertwined with the government through their organisations, linking officials like Michael Gove and William Shawcross, the consequences for a democracy are dangerous. Indeed how far will these people of dual loyalties go to protect their own interests, or the interests of Israel, against the interests of Britain? The broader impact of this is deeply disconcerting given that neoconservative/Zionist thinking is practically steering British politics in the interests of foreign countries. Will pressure be placed on HJS to distance itself from influencing government policies and actions? Will the Daily Mail in sync with agitpropist Murdoch papers run a campaign smearing HJS? Will Shawcross’ Charity Commission launch an investigation into HJS?

And finally, the question must be asked, who indeed constitutes the greater threat to Britain?