“I want to see a permanent Anglo-French entente allied to the Jews, Arabs, and Armenians which will render pan-Islamism innocuous…” – Mark Sykes, 1917[1]

The Middle East is experiencing convulsions as the vicious cycle of violence continues and the boundaries which were once drawn upon ignorance and arrogance remain in a state of uncertainty. The continued Western violence in the Muslim world and the destructive responses of individuals in Europe too are also not disconnected from history and historic politics. Indeed, the upheavals in the Middle East are not an isolated phenomena, as is often made out to be.

The source of this great distress for Muslims has been in no part due to the intrigues and “great games” which have played out over the past century.

The next couple of days will witness the centenary of the Sykes-Picot agreement. It has been central to Western power play which has seen Britain ostensibly establish itself as a sponsor of Arab nationalism, and through the Balfour Declaration, which helped establish the Zionist entity in Palestine through utter deception, a sponsor of Jewish nationalism. The effective divide and conquer strategy brought an end to the Islamic unity.  Writes the British historian David Fromkin,

“… the British decision to dismantle the Ottoman Empire finally brought into play the assumption that Europeans had shared about the Middle East for centuries: that its post-Ottoman political destinies would be taken in hand by one or more of the European powers.”[2]

Mark Sykes’s vision for the future was one which would render the Islamic unity “innocuous”.[3] It is little wonder that the Christian historian George Antonius described the Skyes-Picot agreement as,

“…a shocking document. It is not only the product of greed allied to suspicion and so leading to stupidity: it also stands out as a startling piece of double-dealing.”[4]

Some warmongers and commentators have sought to whitewash the effect of the Sykes-Picot agreement.  Tony Blair is a notable individual who dismisses the Sykes-Picot agreement as a root cause of violence and instead promotes the myth that it is all due to ideology (and specifically “Islamism”). A recent piece published in the Middle East Eye also provided a comforting arm around Arabs by quoting a former Pentagon official who now works for a notorious US neocon think-tank, that “rather than lamenting Sykes-Picot” it should be recognised for the “opportunities for freedom and national aspiration”.  Of course it ignores the decimation and cleansing of the Islamic paradigmatic social structures, physically, culturally, and linguistically, and the imposition of a secular system which was alien to the region and which was at best was irrelevant, let alone an aspiration of the local peoples.

The Balfour Declaration and the British engagement with Zionist leaders formed the basis of the trajectory of the ethnic cleansing of Palestinians, and the more contemporary killing of Palestinian men, women and children every few years by a Western-armed and funded killing machine.  Today, Zionism is being defended tooth and nail, whilst efforts to criticise it and Israel are increasingly being couched as anti-Semitism and therefore censored.  The Chief Rabbi Ephraim Mirvis has fuelled the Zionist spin machine further to achieve the same, whilst “reformist” deformist Muslims like Maajid Nawaz also pander to the Zionist cause by rejecting the boycott divestment and sanctions movement, and providing the utterly spurious chorus for the conflation of “anti-Israelism” with anti-Semitism.  The subsequent backlash from Jews is sufficient reason enough to dismiss such nonsensical propositions.

Interestingly, Sykes himself recorded doubts about the document bearing his name, as well as the Zionist cause. As Antonius records,

“Sir Mark Sykes had returned to Paris early in February from a tour of over two months in Palestine and Syria, and had brought disquieting news. What he had observed on that journey had opened his eyes to realities that had hitherto escaped him. He had been particularly disaffected by his own discovery of the gap between what he had previously understood Zionism to be and what he had just seen of Zionism in the making in Palestine and of its effects on the minds of the Arabs.

“… From being the evangelist of Zionism during the War he had returned to Paris with feelings shocked by the intense bitterness which had been provoked in the Holy Land. Matters had reached a stage beyond his conception of what Zionism would be. His last journey to Palestine had raised many doubts, which were not set at rest by a visit to Rome. To Cardinal Gasquet he admitted the change of his views on Zionism, and that was determined to qualify, guide and, if possible, save the dangerous situation which was rapidly arising.

“Sykes’s views about the Sykes-Picot Agreement had undergone a similar revulsion: he had become convinced of its inadaptability to actual conditions and of the futility of trying to execute it. And although he was feeling worn out with the exertions of his tour, he had hurried back to Paris bent upon doing all he could to correct false hopes and put a brake upon ambitions which now seemed to him insensate. But within a few days of his return he fell ill and died.”[5]

Despite his change of heart, his plans were actualised by others to devastating effect. 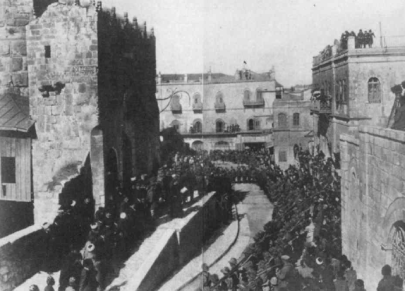 The reading of General Allenby’s proclamation of martial law in Jerusalem, December 1917

Islam and the authority of the Caliph was manipulated to such an extent that Britain engaged in Caliphate-building. Saudi Arabia was Britain’s compensation to Islam for the destruction of the Ottoman Caliphate.[6] It’s creation also served the purpose of controlling Muslims; Islam, as Fromkin writes, was a faith which needed to be brought “under Britain’s sway”,[7] and thus was forcibly “civilised” in the words of Evelyn Baring, 1st Earl of Cromer, and dissected through the label of “Wahhabi”.

Today, beneath the new, neoconservative-pimped rhetoric of human rights, democracy-spreading and warring on “terror”, little has changed.

It is ultimately the attack on Islam, both physical and psychological, which is resulting in the multi-faceted responses; be it the illegitimate violence in Western countries, the resistance to a colonising force in Palestine, or the revival of Islam through “modern” phenomena like the Muslim Brotherhood and Hizbut-Tahrir – both movements protracted through the paradigm of the nation state and democracy. Whether these are legitimate (intellectually or otherwise) is not the point of discussion. It is the fact that these occurrences can be traced to the European colonial adventures which destroyed the paradigmatic Islamic institutions of a system which helped facilitate the local cultures in a fashion which has become an anathema in today’s increasingly assimilationist Europe.

Echoing the colonial policies which saw the destruction of the spiritual, linguistic and cultural facets of the Muslim world as part of the modern project, neoconservative Britain has embarked upon a similar mission to restructure the thought-processes of Muslims under the rubric of “extremism” in a manner which does away with their religion by instilling doubt in the Qur’an and the sources of authority, and replacing them with the formaldehyde of secular liberalism and progressivism.  Whether these efforts have any intellectual veracity has been the subject of previous blogs. Suffice to say, and rekindling Cromer’s objective, this is taking place in a societally coercive fashion. Under this forced, evangelised liberalisation project, mosques are set to be closed down, Imam’s banned, television censored and the Islamic conscious targeted for intervention all upon the basis of a word (“extremism”) which has a definition so fluid that Parliament struggles to make a decision.

And this, in an atmosphere which has only increased in its anti-Muslim toxicity. Muslims, as “liberal”, pro-Israel, and religiously neutered as the new London Mayor Sadiq Khan are still the butt of anti-Islam, anti-Muslim tropes of terrorism.  Reputable Imams are judiciously smeared as part of the neoconservative deception which characterises today’s government, again using the terrorism card. Even the police are helping to reinforce negative Muslim stereotypes.

Foreign policy too, is little different.  Warring in the “Sykes-Picot” region is cheered by neocons. Escalating aggression continues against the third most sacred sanctuary in Islam, the Al-Aqsa Masjid in Jerusualem, directly under the cover of these very same neocon-instigated wars. So too continues the Zionist colonialism as calls are made by senior Israeli politicians to annex the occupied West Bank.

Whilst the naysayers bemoan and dismiss the above as “grievances”, Muslims are reminded of these two conspiracies against the Muslim Ummah, as new iterations and language sets of the colonialist bent that are presented through the contemporary vehicle of democracy, human rights and the War on Terror.  With these past and present reminders, the significance of these lands and the centrality of Al-Aqsa Mosque reverberates in the hearts of Muslims the world over.

The Sykes-Picot agreement and the Balfour declaration are two gaping wounds which have yet to be sutured let alone left to heal.

To be clear, no concerted spin from pro-Israel activists like Rabbi Mirvis, no number of neocons and their brainwashed enablers (like Maajid Nawaz, Ed Husain, Usama Hasan, Salah Ansari, Taj Hargey, Sara Khan et al) and no amount of social engineering stratagems can separate the Muslims from their faith and history – by hook or by crook, through deception or otherwise – to the extent that the past conspiracies are historicised and the present designs are blindly accepted.

Indeed, they are planning a plan,

But I am planning a plan.

[1] Fromkin, D., A Peace to End All Peace The Fall of the Ottoman Empire and the Creation of the Modern Middle East, Henry Hold and Company: New York, 1989, p.190

One thought on “Sykes-Picot: A Century of Conspiratorial, Fatal Games”