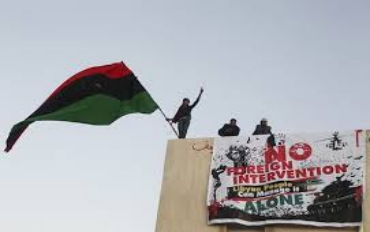 In Khizr and Ghazala Khan, the Democratic Party seems to have found the perfect counter to Donald Trump. Since Trump proposed banning Muslims from the US, his campaign has sought to exploit the fear that Muslims are dangerous and disloyal. But who could think that of the patriotic, constitution-waving Khans, whose son died fighting for the U.S.?

Trump suggested that Ghazala Khan did not speak for Islamic reasons. But this backfired and the episode appears to have hurt him in the polls. Meanwhile Hillary Clinton has been able to establish herself as the candidate of tolerance and liberal progress.

But take a closer look and things are not that straightforward. It is easy to lose sight of why the Khans lost their son in the first place. Humayun Khan died fighting in the illegal war in Iraq, which was launched on the basis of Islamophobic lies, and supported by Hillary Clinton, as senator for New York.

In 2011, Clinton was a leading figure pushing for military action in Libya. She initially presented the bombing campaign as a way to create a no-fly zone to protect civilians. Within three weeks, the real aim became apparent: regime change. When news broke that former leader Muammar Qaddafi had been captured, beaten and killed, Clinton joked with a CBS News reporter: “We came, we saw, he died.” Like in Iraq, the result was the complete unraveling of the country’s social fabric, bringing insecurity and displacement to the mass of the population, while ISIS was able to exploit the chaos to establish a presence.

It seems clear that Clinton will continue her war-mongering foreign policy if she is elected. She will almost certainly increase military action in Syria. Around 600 civilians have already been killed by coalition bombing over the last two years, including 163 children. With Clinton in the White House, many more civilians will be killed by the U.S. military in the Middle East, while the root causes of conflict will go unaddressed. Policy will be more aligned with the Netanyahu right-wing in Israel than it has been over the last eight years. Clinton personally intervened to ensure no criticisms of Israel were heard at the Democratic Party convention.

The neoconservative Robert Kagan said of Clinton in 2014: “I feel comfortable with her on foreign policy.…If she pursues a policy which we think she will pursue, it’s something that might have been called neocon, but clearly her supporters are not going to call it that; they are going to call it something else.” In other words, she will pursue a neoconservative foreign policy dressed up in the liberal vocabulary of humanitarian intervention. Little wonder that neoconservatives like Kagan have turned to support her instead of Trump, and as actively as possible — Kagan recently hosted a fundraiser for Clinton in Washington DC.

Her neoconservative backers understand what her liberal supporters do not: when a conflict arises between the liberal values she espouses and the demands of U.S. empire, she always chooses power over principle. When genuine democratic movements emerge that threaten U.S. interests, such as in Honduras in 2009 and in Egypt in 2011, Clinton sides with her authoritarian friends rather than with the revolutionaries on the streets.

That has implications within the U.S. too. So long as the government keeps going to war in the Middle East, it will be hard to counter anti-Muslim prejudices among ordinary Americans. Around half of Americans believe Islam is more likely than other religions to encourage violence among its believers. That belief is false: in fact, global polls indicate that Americans are more supportive of violence against civilians than people in other parts of the world. Attitudes toward violence have little to do with religious belief.

But the belief in Islam’s inherent violence thrives because it provides a convenient and simplistic explanation for the violent conflicts in the Middle East, without having to acknowledge the U.S. government’s own role in fostering and exacerbating that violence. Trump’s Islamophobia is a symptom of this deeper problem. But Clinton’s neoconservative foreign policy will make the problem worse.

If the United States follows her lead, acceptance of Muslims may be dependent on whether they seem as patriotic as the Khans. Those who dissent or criticize the U.S. government or Israel will continue to be treated as suspicious and disloyal. Viewed from this angle, Clinton’s embrace of patriotic Muslims like the Khans seems less about liberal principles and more about creating a PR image to deflect criticisms of U.S. foreign policy. That’s not treating Muslims as fellow citizens; it’s treating them as pawns on a geopolitical chessboard. Such positive images of Muslims may help stop Trump but they can also be used to strengthen the structures of anti-Muslim racism in domestic and foreign policy.

So go ahead and support Clinton to keep out Trump. But don’t feel too smug about being a good liberal if you do. Really, what you’re doing is choosing Clinton’s bombs over Trump’s bans.