During the height of the Trojan Hoax debacle which unfolded in Birmingham mid-last year, corroborated sources, who named their own source, confirmed to me that among the many hands involved in drafting the fabricated “Operation Trojan Horse” letter, were a number of evangelical Christians connected to the controversial Riverside Church.

Among the anti-Muslim heads, was Tim Boyes, the current head teacher of Queensbridge School in Birmingham.

END_OF_DOCUMENT_TOKEN_TO_BE_REPLACED 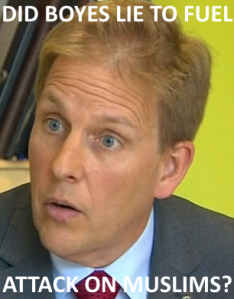 The previous article describing allegations of supremacist attitudes and financial mismanagement as well as takeover plots on the part of the Tim Boyes and procedural impropriety and mismanagement at Golden Hillock School on the part of Reverend John Ray drew some interesting reactions.  Defenders of Boyes claimed a state of denial on the part of Muslims in Birmingham, yet stubbornly refused to acknowledge that the very same issues which Muslim teachers and governors have been accused of exist amongst evangelical Christian teachers as well.  This is the purpose of these blogs, to highlight this hypocrisy, a point which consistently failed to register in the mind of the commenter.  Claiming that possibly problematic practices by governors and teachers are Muslim-exclusive grossly misrepresents facts and is a highly discriminatory supposition.  In the end I had to quote white non-Muslim sources to ram the point home.

As the comments progressed, a disturbing mind-set problem on the part of the defender of Boyes surfaced; there is a latent supremacism in the claims of such people which makes them believe they are riding on a higher perceived moral ground which trivialises or rejects problems amongst white, evangelical Christian teachers, yet similar acts possibly conducted by Muslims is seen as evil beyond comprehension.

I thought this attitude was endemic of the colonialists of yore and the current neoconservative government which still basks in the glory of colonialist crimes, but clearly this sickening mentality still exists in the lower echelons of society.

Most of my points have yet to be challenged, however one particular question, which was raised in the article and repeatedly asked in the comment section, could not materialise a reply from the Boyes defender: why has Tim Boyes, one of the Riverside-linked, alleged architects of the Trojan Hoax letter not repeated the claim he made in a BBC interview that he raised the Trojan Hoax claims to the Department for Education in 2010?

END_OF_DOCUMENT_TOKEN_TO_BE_REPLACED

There is no doubt that there have been failures, from governance issues to power-play, the problems entail a wide diaspora of issues in schools. The key point is this however: these problems are most certainly not peculiar to one faith, demographic or group. My articles in exposing various details of the attacks on the schools have sought to highlight the discriminatory targeting of the Muslim minority – they have never sought to exonerate any mistakes which have been made, unless there are good reasons in doing so, such as the plethora of lies, twists and distortions which have been peddled in the media.

This neatly brings us to my favourite reporter.  The sock-puppeting “journalist” that is the hype-whore Andrew Gilligan did another piece mainly targeting the Jewish community.

Is Gilligan trying to restore some balance in his reporting by targeting the Jewish community? No Gilligan. One tokenistic piece is nothing compared to the targeted harassment of Muslims you have dished out over the six months and the continued surveillance you or your cronies subject victims too.

Despite some similarities in the allegations made about the Muslim faith schools/madrassas in the UK, and the Jewish schools (that they are insular, non-integrative and “indoctrinating”), there has not been an outcry regarding the Jewish community and the fallaciously constructed possibility of terrorism, despite the fact the British Jews are serving in the IDF. Neither have any of the neocons in Government blustered over the “shocking” revelations which are unseating “British values”, whatever they may be.  After all according to the report, a number of Jewish schools stop teaching secular subjects to focus on yeshivas (religious studies), with Yiddish being the sole language being taught. In spite of this, no allegations, by Gilligan, are made of “hardliners” pushing “hardline” beliefs (as was done in the context of Muslims) and neither was the appellation “extremist” used to describe any of the aspects of the school’s “preaching”. Zionism is taught in their syllabi. Will Wilshaw be forming policy suggestions based on the potentially extremist nature of their curriculums and link it the fact that Zionism is a supremacist ideology which has been condemned as racism?