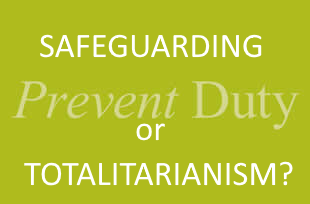 Last year, the hate-financed Henry Jackson Society published a report on how to spin away criticism of PREVENT. One of its suggestions was to recast the public surveillance programme as “safeguarding”.  There has been an amplification of this spin by most government-paid PREVENT practitioners, promoters and careerists since then.  This claim both from a historic and conceptual point of view, is woefully inaccurate and a continued demonstration of how the PREVENT industry is deceptively manipulating narratives.

As I have explicated in some detail, the counter-productive pre-crime approach to countering terrorism was not based on empirical evidence but the paradigmatically neoconservative military doctrine of pre-emption.  McCulloch and Wilson (2015), in their book exploring “pre-crime” intervention state,

“The declaration of the “war on terror” was the catalyst for a more pre-emptive approach to threats.”

With the War on Terror aimed at Muslim countries, PREVENT’s focus from its very inception has been to control Islam and Muslims through what Ruth Kelly once called the “winning of hearts and minds” – a punch line which inherently denoted propaganda warfare and which usually accompanies hot war.  The fundamental difference to normal propaganda warfare during military campaigns and the PREVENT Strategy is that PREVENT is being waged against Britain’s own Muslim citizens.  In 2007, PREVENT funds were directed to those local authorities in England with 5 per cent or more of their population identifying as Muslim. In other words, funding was allocated based on the number of Muslims as opposed to risk.[1] This discriminatory focus on Muslims has continued through the years, with the Guardian last year reporting that PREVENT was being prioritised to target mainly Muslim areas.

END_OF_DOCUMENT_TOKEN_TO_BE_REPLACED

In a world dominated by a fast-paced environments denoted by the maximisation of profits, the tendency to enter into “cruise-control” upon the pathway of life is inevitable. The often spiritually devoid nature can take its toll. For Muslims, the month of Ramadan operates as the nudge which forces the Muslim psyche to recognise the spiritual state and take steps through the obligatory fasting (sawm) and associated worship to reform the soul.

Sawm is not just merely a ritual; it’s an obligation which is central to Islam to the extent that it is referred to as a pillar of this religion. To unshackle the understanding of modernity imposed upon Islam, it is not simply a ritual relegated to the private sphere but operates as an act which imbues the soul with Islamic morality which is defined by its quality of transcendentalism – i.e. its implications are not limited to the temporal but far more importantly, beyond the ephemeral. For a believer it is sine qua non for the purposes of discharging one of the most fundamental obligations in Islam.

Recent reports however, have taken to delegitimising fasting in the month of Ramadan in the context of schools.

END_OF_DOCUMENT_TOKEN_TO_BE_REPLACED

It is hard to believe that it has been a year since I last wrote about Al-Hijrah School and the incompetency and distortions exhibited by state propagandist Andrew Gilligan and the Birmingham City Council. Al-Hijrah school is one of the first Muslim schools that was dragged into the anti-Muslim vacuum that was the Trojan Hoax and resulted in disturbing consequences for the school – even though it was already a faith school. Al-Hijrah School – a school with an Islamic ethos – had its governing body and senior leadership team purged of Muslims and replaced with non-Muslims who allegedly later denigrated the Islamic ethos of the school.

persists. Whilst bogus “Muslim wrongs” were splattered across the pages of Birmingham Mail and the Daily Telegraph, there has been utter silence on outrageous allegations made against the good white master folk who replaced the backward and uncivilised Muslims.

This duplicitous standard, however, will continue to be exposed.

END_OF_DOCUMENT_TOKEN_TO_BE_REPLACED 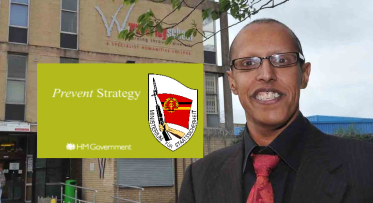 END_OF_DOCUMENT_TOKEN_TO_BE_REPLACED

During the height of the Trojan Hoax debacle which unfolded in Birmingham mid-last year, corroborated sources, who named their own source, confirmed to me that among the many hands involved in drafting the fabricated “Operation Trojan Horse” letter, were a number of evangelical Christians connected to the controversial Riverside Church.

Among the anti-Muslim heads, was Tim Boyes, the current head teacher of Queensbridge School in Birmingham.

END_OF_DOCUMENT_TOKEN_TO_BE_REPLACED

Over the course of the blogs published on the alleged Christian evangelical involvement into the instigation of the takeover plot, several key allegations have emerged:

Recently, through my own research, I have come to realise that these pieces of information fit into a potentially broader narrative. I will stop short of calling it a “plot”, but based off Peter Clarke’s criteria of establishing a “plot”,

“The tactics that have been used are too similar, the individuals concerned are too closely linked and the behaviour of a few parents and governors too orchestrated for there not to be a degree of coordination behind what has happened,”

there seem to be strong grounds here of a particularly grand evangelical plot taking place.

The question which needs to be asked is, aside from the neocons who have now the pretext to further push their anti-Islam agenda, constricting the Muslim minority in any way they can, who has benefited from the Trojan Horse allegations in Birmingham, the epicentre of this entire scheme?