I have pretty much stopped watching BBC programmes, especially given the psychotic Zionist, pro-Conservative (or rather, neoconservative) lean the Beeb elicits. Seeing the bubbling social network activity around the recent Big Questions programme, I decided to break with my intuition and watch it. The result? It reminded me of Frantz Fanon’s depiction of the colonialist French who would entertain themselves by mocking the “backward” – it was a show of individuals so inebriated by their own sense of superiority that they were blind to their own hypocrisy.

And indeed as I tried to play “word association” to psychologically disassociate from the mental trauma inflicted by the circus act,  I kept cycling through words starting with “hypocrisy”, “deception”, “dishonesty” round back to “hypocrisy” again.

Right from the start “Islamo-fascism” was used to describe ISIS by Nicky Campbell.  This term has been used by the far-right/liberal interventionists and extreme neocons like Norman Podhoretz who wants a World War IV (WWIII is the War of Terror according to him) to describe Islam itself.  A Freudian slip indicating a very neoconservative bias, perhaps? It would certainly explain his glee witnessing the reactions of neocon Emily Dyer. More on her later.

END_OF_DOCUMENT_TOKEN_TO_BE_REPLACED

Asim Qureshi, CAGE’s Research Director, interviewed Umm Ahmed upon her release, she was convicted under the 2006 Terrorism Act for the possession of terrorism material. She was sentenced to 12 months in prison and was released in 2014. As part of her release, she was subjected to the government’s deradicalisation programme, despite the judge in her case accepting that she was not a terrorist, nor had she ever posed a danger to UK society. The case speaks to how terrorism legislation, the Prevent strategy and its accompanying Channel programme, seek to create statistics of terrorism, where the reality is very different.

With the government seeking to push through the Counter-Terrorism and Security Bill, it is stories such as that of Umm Ahmed that should encourage us to rethink the narrative of whether or not there is an actual terrorism threat, or if these stories are more indicative of a threat being created.

END_OF_DOCUMENT_TOKEN_TO_BE_REPLACED

A community campaign has been set up to stop the Counter Terror Bill which is being rushed through Parliament.

One of the key aspects being pushed is Part V of the Bill which enshrines the legal enforcement of the Stasi-State creating PREVENT Strategy. The impact of this that, far from being a non-intrusive state founded on traditional liberal principles, we have one of the most heavily regulating governments in history, and that regulation is of thoughts – a non-derogable, absolute human right. The impact is on every citizen of this country.

Any effort to counter the push of this Bill is to be welcomed.

Please support, share and find out what you can do at stopthebill.co.uk

Analysing the Impact of the Counter-Terror Bill

Imagine if a group of people with an ideology which completely tears apart principles of human rights, democracy and rule of law and which had an ideologically driven hatred of a minority were advising and influencing government policy, how would the public and hyperbolic media react? If the group were Muslims, the media and politicians would be crucifying the Muslim minority multiple times a day for several months and then building policies implementing a “fix” for those pesky Muslims. The bigoted “counter-jihad” movement would be out in their hate-filled troves talking about how the “Trojan Horse” Muslims have “taken over” Britain. In fact we saw what would happen when such allegations were made in the education sphere. Michael Gove went berserk.

Cue the Henry Jackson Society, a strongly neoconservative outfit which has been involved in two critically important areas which have maximally impacted the Muslim minority – homeland and international security. Neoconservatism is the “mode of thinking” which has resulted in the rule of law and human rights being continually eroded in Britain. It philosophically postulates one language and thinking for the people and one for themselves which they abide by. For those who think Cameron et al’s rhetoric of “British values”, democracy, human rights and rule of law is sincere, one merely has to look at the PREVENT strategy, Counter-Terror Bill and their rubric around the Human Rights Act to see the aforementioned values being shredded to pieces. Neoconservatism is about duality at every level. Hence even in the context of foreign policy, neocon Britain thoroughly enjoys lecturing Russians about adhering to their international obligations but becomes asphyxiated when it comes to critiquing the Zionist state about its observance of obligations. The love of liberalism is an emotional façade for the people which the neocons can abuse to attain power. The reality of how neocons regard liberalism is as stated by Irving Kristol, the “godfather” of neoconservatism,

END_OF_DOCUMENT_TOKEN_TO_BE_REPLACED 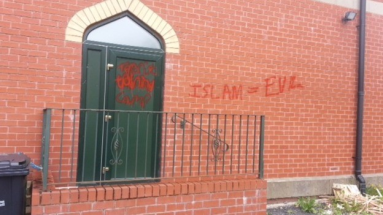 A Masjid in Bolton

After a year of writing articles refuting and exposing the lies, spin and hypocrisy of right-wing/neoconservative politicians and media outlets, the latent bigotry of secular liberal proponents who propound “equality” at (primarily) the expense of the Muslim minority, one may conclude that xenophobic hypocrisy is a firm part of British policymaking. Muslim minority discrimination has become all but a norm in Western societies, which pride themselves on the notions of due process and human rights. A change in condition is required in line with the international legal status of a minority. Let this not be spun into what secularist extremists like to call, “special treatment”. No. The Muslim minority needs to be freed from political point-scoring, smearing and scapegoating, and free to practice the Islamic faith like other Orthodox communities. It must be freed from government intervention into religion architecting the “right” beliefs which suit government foreign policy objectives, and free from labels of “extremism” being applied to our manifestations to signify “wrong” beliefs. Yes we agree with the secular liberals. We don’t want this special treatment.

As other media outlets like to review the previous year highlighting what has passed, I will take a different approach. There has been a grand orchestration by the government to push for power at the expense of principles which safeguard the man from state abuses. This I have consistently argued has philosophically stemmed from the neoconservative persuasion adopted by key officials as a matter of policy. Let us briefly go through the key events which I think have been crucial in perpetuating Muslim minority discrimination in 2014.

END_OF_DOCUMENT_TOKEN_TO_BE_REPLACED

An interesting video taking a brief look at how government fear-mongering has allowed liberties to be eroded.  For the full analysis of the new liberties-destroying Counter-Terrorism Bill, see below:

Analysing the Impact of the Counter-Terror Bill

It was a matter of time really.  As the cold war on the Muslim minority of Britain hardens, the various cavalries of the neocons are invoked to make conditions harder for Muslims in Europe.  Through the slippery slope, from al-Muhajiroun, through to HTs, Salafis, and more recently Sufis, the entire spectrum of Islamic groups and beliefs and those who hold it are being criminalised and castigated.  The entire Muslim minority – barring various strands of “reformationists” and those who prop the neoconservative strategy of policy actualisation through fear-mongering  of an exaggerated or architected subversive “enemy” in the counter-extremism, civil liberties-eroding cabal – is under a concerted attack which is only set to worsen with the enactment of the new Counter-Terror Bill (CT Bill).

Hot on the heels of his blatantly anti-Muslim attack against Tower Hamlets, and probably after some extra tea and biscuits paid by taxpayers, Eric Pickles’ (Faith Minorities in Action Project) PREVENT-funding cut has targeted two respected charities demonstrating the slippery-slope nature of the discourse of PREVENT. Islamic Help, a charity which was founded in Birmingham within the bricks of Sultan Bahu Trust, has now been tainted with the yellow star of David of contemporary times: “extremism”. The Muslim Charities Forum (MCF) have had their funding cut, which is probably a good thing, as I wouldn’t want any charity to be part and parcel of a Muslim social re-engineering project.