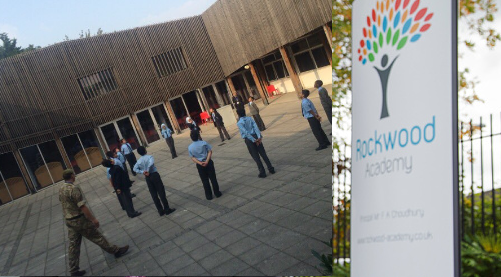 The Trojan Horse event of 2014 in Birmingham, which saw a political and media campaign to prove a “Islamist plot” to “takeover” state schools, and its fallout will go down in history as an eerily textbook implementation of neoconservative “father” Leo Strauss’ vision of the closed society.  Briefly, the fascist thinking of neoconservatism has exploitation of fear, public deception, ruthless militarism and a totalitarian society as its tools and aims. As I have covered in some detail citing neoconservative writers and thinkers, the idea is that an active military abroad will result in people handing their freedoms here at home on a platter to an intrusive, all-encompassing state controlled by a small elite.  Ultimately, a society willing to sacrifice its life for the neoconservative state is the ideal.  This seemingly dystopian vision however has more than flavour of reality in Britain.

The Trojan Horse fiasco – now known by Muslims as the “Trojan Hoax” – entrenched the far-right myth of the “Muslim takeover”. This was done by employing lying journalists to cook up stories of “extremism”, whilst neocon infiltrated education departments and regulators (Ofsted) were weaponised into feeding the myth of the Trojan Horse.  Muslim teachers were purged on the flimsiest of reasons – privately held beliefs – in order to fulfil the interconnected purposes of providing a pretext for regulatory measures (PREVENT), and constructing the fifth column Muslim enemy archetype. Of course, Ofsted was criticised by a host of academics early on, the “Trojan horse plot” turned out to be an elaborate piñata constructed by neocons, and courts are now overturning bans on Muslim teachers.

Despite the slow but steady disintegration of the Trojan hoax pretext, the neoconservative machine is chugging away at chipping and socially re-engineering the open society into a closed one. Leading the way is the Muslim-majority, Birmingham-based Rockwood Academy, formerly known as Park View School – the first victim of the Trojan Hoax political Islamophobia in the education sector.

END_OF_DOCUMENT_TOKEN_TO_BE_REPLACED

The political landscape globally has been changed thanks to the Panama Papers. A consortium of independent journalists have releases a trove of hacked details from the database of Panama-based law firm, Mosack Fonseca (MF), implicating politicians, celebrities and the wealthy engaged in shadowy arrangements to hide their wealth.

Those Linked to Neocons

MF itself offers wealth management and company law services for off-shore jurisdictions like the British Virgin Islands. In short, it can help set up shell companies that disguise the beneficiaries – an ideal set up for gangsters, banksters, and impious politicians.

Reading through the list of individuals exposed in the leak, it is interesting to note that some of the individuals are linked to neocons in some way or another.

END_OF_DOCUMENT_TOKEN_TO_BE_REPLACED

I am actually quite looking forward to this year. Neocons are set to go crazy making the task of exposing this toxic threat to British society all the more vibrant. And what better way to start this year with the discriminatory head of the British state, the Muslim-bashing Prime Minister David Cameron.

END_OF_DOCUMENT_TOKEN_TO_BE_REPLACED

Last week, leading Republican presidential candidate Donald Trump provoked global outrage with his call for a ‘temporary’ ban on all Muslim immigration to the United States.

His remarks also sparked enthusiastic support from neo-Nazi white supremacists, triggered a spike in campaign donations, and maintained his 35% lead in the Republican campaign race.

END_OF_DOCUMENT_TOKEN_TO_BE_REPLACED

The media outlets have relayed their dismay at the outpourings from the pucker-mouthed, flame-headed Republican candidate Donald Trump. From closing down mosques, and requiring all Muslims to register onto a database, to banning Muslim immigration, Donald Trump is, in the one words of one journalist, “at war with Muslims”, thoroughly exploiting the growing anti-Muslim sentiment in the West. The media has painted his views as fringe, however, could not be further from reality, at least at the policy level. Trump is tip of an iceberg of narratives rooted in neoconservatism and its proponents.

It is worth noting that American neoconservatives like David Frum have openly backed Trump in the past. At that time, too, Trump was on the train of hype and demagoguery, obsessively attacking Obama through “birther” allegations, fuelling the architecting of the “other” and feeding the far-right claims that Obama was a “closet-Muslim”.

His current campaign continues the theme of fear-mongering of the “outsider”. It began with Mexican immigrants being stereotyped by Trump as “drug dealers, criminals and rapists”. His focus has, over the course of the year, transitioned to Islam and Muslims.

END_OF_DOCUMENT_TOKEN_TO_BE_REPLACED

There was tragic irony in the recent words of the NUS President Megan Dunn. Allow me to elucidate.

Dunn, capitulating to the pressure mounted by the neoconservative lobby – constituted of William Shawcross, Peter Clarke, George Osborne, and fronted by David Cameron – pleased the gleeful “native Muslim informants” over at Quilliam when she dissociated from CAGE, perhaps trying a little too hard in the process. She stated that the dissociation with CAGE was due to NUS’s policies on “anti-racism, anti-fascism and how we define anti-Semitism”.

END_OF_DOCUMENT_TOKEN_TO_BE_REPLACED

The release of a report which points to democracy being undermined by a society linked to a shadowy network of hate-financing, anti-Muslim, pro-Zionists should have at least twiddled the whiskers of some of the media.  In fact, the symposium held at the University of Bath on Islamophobia should have made some headlines:  this was perhaps the first time an academic and intellectual response to the dominant narratives surrounding the Muslim minority were collated and deployed on a single platform.  The major media response? Nowt.