A report commissioned by 5Pillarsuk.com reveals some interesting insights into the beliefs and views of Muslims in Britain.  One hundred and fifty “influential” Muslim respondents across the Islamic spectrum were queried. The results demonstrate a problematic curve ball for neoconservatives and their endless efforts to target Islam and Muslims.

The questions revolved around normative Islamic beliefs, and across the board a generally high level of agreement with these beliefs was achieved. Participants rebutted dominant propaganda against Islam and Muslims. For instance, 100% agreed or strongly agreed that forced marriages are forbidden, and 100% agreed or strongly agreed that British Muslims are an “integral part of the UK”. It also established a high rate of agreement upon those beliefs and practices which are typically attacked by politicians in concert with the media, analysts and commentators:

END_OF_DOCUMENT_TOKEN_TO_BE_REPLACED

“We will be absolutely clear about the people and groups we will not deal with because we find their views and behaviour to be so inconsistent with our own.”

Following on from my previous blog, I take brief look at the Counter-Extremism Strategy which has been published to much neocon fanfare and celebration.  Most of the measures have been either already implemented unofficially, or announced as upcoming proposals. I have covered these parts in detail in the following blogs:

In short, it’s the usual inevitable neoconservative mix of Machiavellian fear (“dangerous”, “poisonous”, “harmful”, “threat”, “extremists”, “Islamists”!), double speak (protect freedoms by curtailing them/“targeted powers” which are “flexible”/claiming “not about Islam” but advancing only “liberal” Islam), and irrationality (the Strategy is based on the PM’s assertions rather than empirical evidence, whilst conflating crime into the extremism discourse), not to mention implicit association with negative cultural practices with Islam and Muslims (or the phantom menace that are the “Islamists”), adding to the stigmatisation of the Muslim minority.

Any additional points? There are few which twiddled my whiskers as they say. Below is my elucidation of those points.

END_OF_DOCUMENT_TOKEN_TO_BE_REPLACED

One of the most evident and prominent issues of self-proclaimed “reformist” deformists often guided by the malicious neoconservative discourse on Islam is that just a like a deformity, the arguments promulgated are often malformed, incongruent and inconsistent. With materialism and unfettered desires replacing a heart nurtured by spirituality, the claims of such individuals are as erratic as their egos.   Be it “feminists” like Sara Khan using women as “weapons” in the fight against extremism, or “reforming liberal Muslims” who use post-modernist malarkey to give justification to their lifestyles devoid of Islam, oxymoron and desperation does not begin to describe these efforts to deconstruct Islam and the Muslim identity rooted in within the Islamic paradigm.

Maajid Nawaz is no different in avoiding these contradictions.  Whether it is bemoandefing “hatchet-jobs” against him while feverishly tweeting blatant propaganda from the Daily Mail, happily receiving funding from “extremists” to counter-extremism, or attacking journalists and academics who have criticised him for their “privileged elite” backgrounds whilst simultaneously acting as a significant conduit in delivering a neoconservative, colonialist campaign of “reforming” Islam  to the glee of hate preachers like Douglas Murray and Sam Harris, (and blatantly ignoring his own Western liberal privilege when lecturing Muslims about the need to reform Islam to conform to ethereal liberal ideals), there is a clear display of the hallmarks of one riddled with internal conflicts devoid of a stable moral-compass.  Indeed, this moral compass, in his own words do not require “Hadith to set… morality”, the second foremost scriptural set of texts which form the basis of Islam.

END_OF_DOCUMENT_TOKEN_TO_BE_REPLACED 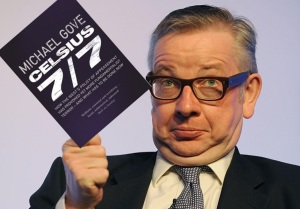 In this series, we will delve deeper into the views held by our new Justice Secretary, Michael Gove as articulated in his book, Celsius 7/7, with additional commentary explaining the neoconservativism underpinning the statements where appropriate, and the impact it has thus far had on the good Britons of this country.

The belief in Islam has been used by the Police and other Government bodies in Britain to disadvantage Muslims (see here, and here, for instance). The core understanding of this draconian manifestation can be found in Michael Gove’s book, Celsius 7/7. An inspection of this book reveals views that give credence to Whitehall sources, which have been quoted as having said that,

“Michael Gove’s views are so incredibly black and white. It’s either his way or no way. He seems to think that anybody who strictly follows Islam is not really integrated… And he thinks anybody who holds conservative Muslim views is a bit of an extremist.”

The Whitehall source went onto suggest that his agenda drove his militant “intervention” into the Birmingham schools last year vis-à-vis the Trojan Hoax plot.

END_OF_DOCUMENT_TOKEN_TO_BE_REPLACED

In response to the Archbishop of Cantebury’s warning about being too quick to call people with strong religious views “extremists”, Reverend Gavin Ashenden expressed concerns about the Qur’an, which were outlined by the ever-objective Daily Fail. According to him,

“Islam has, I think, over 100 verses inviting people to violence in the Koran which Christianity doesn’t have. If you’re going to invite people to be dedicated … followers of their scriptures, Christians will go around forgiving people and Islamists will do something else.”

He then declared that Christianity is about “delivering people from evil”. Upon being asked whether the Qur’an was evil, and after citing verses which “tell you to kill your enemies” and “strike off the heads” he said, “I notice that they invite people to violence. I’ll let other people decide whether that’s good or evil,” thus intimating the Qur’an is “evil” without explicitly stating it.

I respect the priest for airing his view, although I do question the opportunistic nature of his delightful contribution to the theological discourse. In an era in which Islam and Muslims are open season for all manner of physical and non-physical attacks, such statements add to the demonisation of Islam and Muslims in Britain.  However, it is welcomed.  I’d rather have a priest who is honest in his view of Islam, much like the rawness which emanated from Pastor James McConnell than a deceitful neocon who disguises his assaults on Islam behind the façade of “Islamism”.

END_OF_DOCUMENT_TOKEN_TO_BE_REPLACED

Brace yourselves for round two of forced assimilation in schools, twists, lies and distortions to maintain the fear-mongering around the most dreaded of all people, the beings who would make Freddy Cruger look like a Care Bear and a faith which would the big blue monster in Monsters Inc look like a My Little Pony: Islam and Muslims.

This time a Church of England school [non-Muslim white folk: shock and horror!] has been placed into measures because there was inadequate protection from “Islamist extremism” due to lack of oversight of an Islamic Society run by Muslim students [non-Muslim white folk may now breathe a sigh of relief, extremism and the Church, how absurd?!].

The school has many accolades, including rapid improvement, outstanding performance and a committed team leading the school.  However, the neocon-compromised and biased, agenda-driven Ofsted felt it necessary to place it in special measures for some rather conspicuous reasons which are familiar to the Muslim minority.

One of the issues raised was the allowing of separations between boys and girls in the playground.  One report noted,

Local education sources have accused Ofsted of over-reacting – saying it was “taking a sledgehammer to crack a nut”… Defenders of the school point out that the playgrounds were also segregated at the time of previous Ofsted reports which proclaimed the school “outstanding”.

And so the new (anti-Muslim, neocon PREVENT-inspired) standards are now taking effect further afield.  The underlying issue is that the pupils being segregated are Muslim, and this was perfectly exemplified in the fact that one school had been praised for being “innovative” for separating boys and girls in a class.  The difference here was the school was not Muslim-majority.

Another key issue according to reports revolves around the activities of Facebook site setup by the Islamic Society which contained links to hard-line “Islamist preachers”.

Sky News, in whipping up the hysteria struggled to find anything extreme which would be deemed questionable on the YouTube channel, it seems.  The report has been playing an excerpt from a video on the YouTube channel.  I need to break this part of the report down because frankly, this is laughably ridiculous and possibly even defamatory.

The Facebook page appears to have been taken down, but in a video still visible on the society’s YouTube channel, a preacher suggests Muslims should tell men who are “a bit feminine” to “be a real man”. The preacher is not thought to have been addressing the Islamic society at the school.

Now, just before this, the context is set that the Islamic Society’s Facebook page had links to “hard-line Islamist” speakers.  I would like to how Sky News’ interpretation of statements made in a video (to which I will turn to in a moment) are “hard-line” and “Islamist”.  Substantiation of this would go a long way – it would help Muslims to attune their behaviour in concordance with the neocon, white elite’s wishes, and give a little guidance to schools to ensure the “right” type of Muslim is carved.

END_OF_DOCUMENT_TOKEN_TO_BE_REPLACED

Despite the fact that Tony Blair has lost credibility amongst the masses, his Tony Blair Faith Foundation has operations in 30 Middle Eastern and African countries where it exports his thinking and has recently discussed domestic policies which strike a disturbing semblance with existing strategies in place. As such I felt it necessary to write a series of pieces on Tony Blair, the neoconservative “persuasion” embedded in his rhetoric, and his declarations which are reflected in his recent essay and which seeks to implement more broadly the contemporary neocon Western foreign policy.

The public refutations and exposes of neoconservatism during the 2003 Iraq war rightfully condemned the idea and its proponents surrounding George W. Bush like Paul Wolfowitz to the point that it became even more recluse than the natural propensity of neocons to disguise their policies.

During that time, it was not the likes of Douglas Murray, but Tony Blair who supported and implemented neoconservativism in his foreign and domestic policies. Tony Blair was in fact ahead of the neocons and for one commentator, he was “the original neocon”. William Kristol, the inheritor of Irving Kristol’s neocon legacy, approvingly said of Blair,

“Blair was one of the first world leaders, I think, to really grasp what had happened on 9-11 and its implications, that we were in a global war in terror, that we had to transform the Middle East, the whole thing… I think after the attacks in July, Tony Blair has now gone the next step.”

In an interview with Panorama, Kristol gave his conclusion on him: “I think Tony Blair is a kind of neoconservative, despite himself”. Recently, when Blair tried to remove himself of blame from the Iraq war, calls were made for him to be removed as a (laughable) “peace” envoy. However this shifting of blame was not dissimilar to the behaviour of the US neocon architects of the Iraq 2003 war. William Kristol and Paul Wolfowitz also distanced themselves, blaming the current state of Iraq on Obama for failing to intervene.