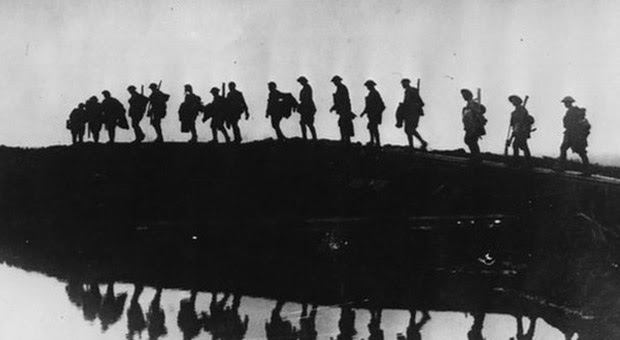 It is sad that some people feel the need to put a ‘spin’ on history to manufacture a ‘shared experience’ – omitting the wider context that these Muslim soldiers were in Britain’s armed forces due to imperial conquest of India and elsewhere.

The only credible shared experience is that both Muslim and non-Muslim soldiers were sent off by the industrial, political and military establishment to die in vast numbers for imperial objectives, the fruits of which would never have been enjoyed by the ordinary soldier or their family and nor the society at large.

In a sense the ordinary foot soldiers were victims in this war.

The real villains were the likes of Lloyd George, Kitchener, Curzon and Balfour who sent millions to die in a war that was to secure Britain’s imperial position.

Muslim soldiers who fought with Britain

Some Muslim soldiers refused to fight other Muslims. Others fought on condition they did not have to fight the Ottoman army directly.

Even amongst those who did fight in the British Army, it is likely that many of the soldiers who fought with Britain were ignorant of wider imperial plans.

But even with this ‘excuse’, it is hard for a Muslim to see those Muslim soldiers as heroes.

END_OF_DOCUMENT_TOKEN_TO_BE_REPLACED

My writings have thus far centred predominantly on neoconservatives, who are not merely threatening, but decimating British values.  This is with good reason, because neoconservatives are also Zionists who protect Israel from criticism, render insignificance to the atrocities and crimes against humanity perpetrated against the Palestinians and architect phantom enemies to perpetuate the colonialist architecting of the Middle East. All the while, domestically promoting “moderate”, “modernist” and “progressive” Muslims who are pacifist in their protests against crimes perpetuated against Muslims globally.

The Deceit of the British and Zionists

It is worth noting the history around the topic of the deceptive and racist Zionism.  Prior the Balfour Declaration, David Wolffsohn, the right-hand man of the founding father of Zionism, Theodore Herzl and second President of the World Zionist Organisation, in an attempt to calm the alarm regarding the perceived aims of the Zionists in the Ottoman Empire, wrote in the Times,

“While fully admitting the evident desire of your Correspondent to present an objective and impartial account of Zionism in the Ottoman Empire, I regret that his limited knowledge of our movement and the sources from which he appears to have derived it made it impossible for him to realize his desire. The cardinal defect of his article consists in the assumption that Zionism is a scheme for the foundation of a Jewish State in Palestine. This assumption is wrong. His comments upon our movement and his account of the views upon it in Turkish circles are mainly dependent upon this assumption…

“The object of Zionism is clearly defined in its programme adopted at our first Congress at Basel in 1897, and hence known as the Basel Programme… The aim thus formulated is essentially different from the aspiration to found a State and those who attribute to us such an aspiration misrepresent us in a very serious degree, as they are likely, however, unwittingly, to cause difficulties being put in our way.” (D.Wolffsohn, President of the Zionist Organisation, Cologne, May 1st.” (The Times, Wednesday, May 10, 1911; pg. 8; Issue 39581; col B.)

Upon the establishment of the Balfour Declaration soon after the drawing up of the infamous Sykes-Picot agreement, the Arab world was shook in dismay for its claim:

“His Majesty’s Government view with favour the establishment in Palestine of a national home for the Jewish people, and will use their best endeavours to facilitate the achievement of this object, it being clearly understood that nothing shall be done which may prejudice the civil and religious rights of existing non-Jewish communities in Palestine, or the rights and political status enjoyed by Jews in any other country.” (Balfour Declaration, 2nd November 1917.)