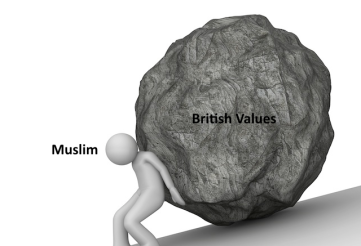 “Irving Kristol came up with the solution that has become the cornerstone of neoconservative politics: use democracy to defeat liberty. Turn the people against their own liberty… if you can convince people that liberty undermines security, they will gladly renounce it.”[1]

The principles of democracy, human rights and rule of law have been “hijacked” and torn down by neoconservatives in government.

Theresa May, an “extremist” by her own criteria of “British values”, has outlined some truly shocking measures to “counter” the notoriously nebulous “extremism”.  Before delving into the McCarthy-May Measures speech, there are few overarching points to keep in my mind.

There is a fundamental flaw which runs straight through her speech.  The flaw is the underpinning conveyor-belt theory of radicalisation i.e. that one begins disaffected, starts practising Islam, becomes politicised and then blows things up.  The professoriate in the counter-extremism and terrorism field have slammed the theory as no longer maintaining any credibility. From sociologists to former CIA operations officer, the focus on ideology, or in this case “Islamism”, has been placed on its head, with it being characterised as incidental as opposed to pivotal.

The second point of note is moral supremacy afforded to liberalism, which has been posited as the zenith of societal values, yet it has been thoroughly shackled, gagged and torn up in pursuit of its preservation, as though it is too weak to stand up to scrutiny.

The final point to keep in mind is the issue of definition.  I am not one to labour this point, as I have addressed this in several blogs in detail (see here).  The issue is defining “Islamist extremism” and “extremism” itself.  The bottom line is, part of rule of law, an ascribed “British value”, is that the law being applied is just, and a law cannot be just if it references vaguely defined terms, especially where the impact is such that it effectively socially cripples one’s life. What are the boundaries of critique and vocal opposition? What is the fault line which demarcates traditional religious beliefs shared across the Abrahamic faiths for instance, and “extremism”? Simply stating they are clear is political-speak with no real meaning. Indeed, the social experiment in which the Muslim minority has been the guinea pig for the PREVENT Strategy has already evidenced miscarriages of justice.

Neoconservatism philosophically advocates deceit and double standards.  One set of standards are assigned for the vulgar masses, and another set for the “statesmen” who are charged with guiding the “vulgar”.  This could not be more fantastically demonstrated than the astonishing words of the neocon Robert Kagan. He believes that (American) power “employed under a double standard, may be the means of human progress – and perhaps the only means”.[2]

Thus we see this postmodernist, immoral quality of hypocritical duality a recurring theme of Theresa May’s speech.  Right from the off we are told that everybody living in the UK is equal and “free to live their lives as they see fit”.  Moments later, a neoconservative negation follows:

“You don’t only get the freedom to live how you choose to live.”

We are then exhorted to a precondition of living freely: respect of a conflation of ideas and beings, a refusal of which presumably would render one an “extremist”.  Respect must be afforded to individuals and minorities and their respective rights, and with this I couldn’t agree more.  Ideas however, are meant to be challenged and critiqued. Does this latter statement not sound familiar?  This is not my logic.  This is the logic that is invoked when Islam is bashed from the entire spectrum of the community – from Zionists, and neocons to extremist liberals. From the Daily Fail to the Times. From a poxy local politician like Khalid Mahmood to David Cameron himself.  Muslims are told that their beliefs will be battered and they must accept the “freedom to offend”.  Maajid Nawaz invokes this argument in his appearances on BBC Big Questions – it is not a race, it is an idea and “no idea is above scrutiny” (the irony is that Nawaz is an ardent proponent of the PREVENT Strategy).

Following this logic, what is wrong with “blaspheming” secular liberalism?  Is free speech only sacrosanct when the discussion involves Islam and Muslims?  These measures go further – they are shaping beliefs by the State by promoting “right” thinking and threatening with sanction those which conflict with “British values” potentially constituting an interference. According to local and international human rights instruments, discrimination based on the absolute right to hold a belief is, well, against the “British value” of human rights.  In other words, protecting human right, by violating them. Charming.

Instead of apologising to the Muslim community for the “Hard Wilsonianism” witnessed in the “theatre of war” that was Birmingham, this seriously screwed up individual has used a disproven (by the Education Select Committee no less!), faux plot to take over schools as a pretext upon which to justify her authoritarian, human rights-violating policies. Using something that didn’t happen as evidence is usually the domain of conspiracy theorists.

Not only does she use the Trojan Hoax plot, she further props her blusters by smearing Tower Hamlets. She projects “allegations of corruption, cronyism, extremism, homophobia and anti-Semitism” in Tower Hamlets as an example of a rejection of “our” values.  “Allegations” is the operative word here.  Allegations, i.e. unproven actions, are being used to as examples of rejection of British values. In fact, the allegations of corruption and fraud in Tower Hamlets, presumably alluding to Mayor Lutfur Rahman, were disproven in an investigation.

If examples are needed why not look inward? Corruption and cronyism are the hallmarks of Whitehall. Recently the Justice Secretary Chris Grayling’s failed to disclose the fact that two of the “independent” selection panellists were Conservative activists. Neocon permeation of key government institutions such as the Treasury, Department for Education and the Charity Commission has been happening for a number of years.  If the “allegations” against Tower Hamlets were true, it seems their inspiration came from neoconservative corruption, cronyism and “entryism”!

Causes of Extremism: ideology and… ideology

Theresa May reveals to us that the causes of “extremism” are ideology, and “social and cultural” norms contrary to “British values”. This convoluted statement essentially postulates that merely possessing a different world view, or a cultural norm, leads one to the path of “extremism” and eventually terrorism.  What this demonstrates however is a deeper xenophobic current which posits the Islamic “cultural norms” of Muslims as inherently “extremist” or at least possessing a propensity toward “extremism”. Professor Arun Kundnani points out, that the “culturalist” account,

“find terrorism’s origins in the content of an ideology that is rooted in an alien culture, whether that ideology is thought of as Islam itself or as Islamist extremism.” [3]

As Kundnani explains, the argument is rooted in the “clash of civilisations” hypothesis advocated by Bernard Lewis and Samuel Huntington. Use of the language of culture in addition to ideology racialises the discourse, with aspects of the culture, being “signifiers” of race.  Put together, it denotes the architected proclivity of a violent Muslim archetype.  The consequence of this is the erosion of the Islamic identity, as it contends with the forced “British values” assimilation. In the words of Conor Gearty, the Professor of Human Rights Law at the London School of Economics,

“There was always a risk that identity politics would be turned into a cultural war, the majority versus the rest. We don’t hurl racist abuse anymore, not in public. We say ‘extremist’.”

Indeed, the focus of May’s rhetoric is not even hidden; it is blatantly discriminatorily profiling the Muslim minority.  “Islamist extremism” is the most “dangerous”, we are told with a tone of authority:

“It’s obvious from the evidence that the most serious and widespread form of extremism we need to confront is Islamist extremism.”

Of course, a statistical analysis of the number of deaths caused by al-Qaeda-inspired violence and those of the far-right motivation shows that both are broadly similar threats (see research paper here, p.29). The far-right populist movements like the EDL have fostered splinter groups like Britain First, which are ever more militant in their approach.  These movements are pandered to by the likes of UKIP and Theresa May, as demonstrated by these counter-Muslim measures. The centre has become “extreme”.

It would be interesting to see May’s “evidence”, which demonstrates the most “serious” and “widespread” form of “extremism”.  Given the definition of “Islamist extremism” entails a rejection of being a “good Muslim” and a British citizen at the same time, what would May make of the BBC poll showing that 95% Muslims in Britain feel loyal to their country?   Studies have already consistently shown that Muslims outstrip Christians and people of no religion in their affinity towards Britain and in some cases are more integrated than other groups. In comparison, a poll of 2,230 British Jews found that 58% of Jews feel they have no long-term future in Britain. This despite the fact that UK is “friend of Israel”, lends full foreign policy support, turns a blind eye to the “extremism” of the orthodox Jewish community and sets aside possibly more funding for protection than any other minority.

If we narrow the discourse on “extremism”, a recent poll by Jewish Chronicle suggested that 67% of those with an opinion would vote for Benjamin Netanyahu. Netanyahu is the same individual who massacred scores of innocent civilians in Gaza on the basis of a lie. Prior to the massacre of Palestinians in Gaza, 2014, Netanyahu told a fellow ultra-orthodox member of the Likud party that, as part of proposed legislation to enshrine Israel’s status as a Jewish state, the Israeli court system would be based on Talmudic law. Shockingly, he recently also rejected a Palestinian state before his re-election, only to “clarify” it three days later.  However, based on his historic attitude toward settlement building on Palestinian land, his clarification is empty rhetoric at best. In a desperate attempt to claw votes, he even resorted to anti-Arab racism.

Three quarters of British Jews polled support this vile, racist man, and there is not a twitch on the radar of the Thought-Police Unit May has revealed, and not a mention in the May’s speech on extremism.

Saying that “Islamist extremism” is a widespread form of extremism is a purely blusterous lies which is indicative of the structural discrimination prevalent in the establishment. The very same establishment which has thus far in practice turned a blind-eye to the far-right and Zionist “extremism” coursing through elements of the “white” and Jewish communities.

In the next part, Theresa May’s “response to the critics” the further proposed measures will be examined.